South Bend Spine uses state of the art minimally invasive techniques and instrumen- tation to help patients recover in a shorter period of time and allow for a quicker re- turn home. In minimally invasive spine surgery, a smaller incision is made, sometimes only a half-inch in length. The surgeon inserts special surgical instruments through these tiny incisions to access the damaged disc in the spine. Minimally invasive spine surgery requires extensive training and experience to master use of the tools, but there is tremendous benefit for the patient.

Unlike many other spine care providers, spine patients who undergo minimally invasive surgery at South Bend Spine can often have their surgery on an outpatient basis and be home later the same day. In some instances, the fellowship-trained spine surgeon, Dr. Henry DeLeeuw at South Bend Spine utilize an ambulatory surgery center to perform minimal- ly invasive spine surgery, enabling these patients to go home the same day. Re- covery in one’s own home can be more comfortable than staying in a hospital bed.

While studies show that more than half of back surgeries are unnecessary, there are times when surgery is the answer.

Discectomy is the removal of the herniated portion of a disc to relieve the pressure on nearby nerves as they exit the spinal canal. Contrary to myths, the disc does not slip out of position like a watermelon seed. Instead, the disc is like a jelly donut, acting as the functional shock absorber between two bony vertebrae.

An injury, or damage from a lifting incident, may causethe jelly center to break through the wall of the disc. When the disc herniates, the jelly center can press on nearby nerves. This causes back or leg pain when the herniation is in the low back, and arm pain if the disc is in the neck area. In a lumbar discectomy, the surgeon typically only removes the portion of the disc that is causing a problem, not the entire disc. If you have a herniated disc, keep in mind that a disc has a purpose. When you remove a disc, it may cause instability in the joint, and a surgeon may recommend a fusion to re-stabilize the area. The surgeon can remove the damaged piece of disc through a traditional incision in the back or neck or with a surgical probe, such as in percutaneous discectomy. Depending on the nature of your disc problem, your surgeon will recommend the most appropriate type of surgery for you.

Cervical is the medical term for "neck." Just as in a lumbar discectomy, the surgeon will remove a piece of damaged disc tissue in the neck area to relieve pressure on the spinal cord or nerve roots. In some cases, by removing a piece of the shock-absorbing disc that separates the two vertebrae, the structures may become less stable. Consequently, when the disc is removed, a surgeon may recommend "fusing" the vertebrae to prevent instability. This fusion surgery may require a second incision in the front of the neck to gain access to the disc area. A cervical discectomy is best left to surgeons who specialize in spine.

A surgeon may use bone from the patient's hip or from a bone bank to stabilize two vertebrae after a discectomy. During a fusion surgery, the disc is removed, and the surgeon inserts a small wedge of bone in between the two vertebrae to restore the disc space. Over time, the two vertebrae "fuse" together into a solid structure. While this limits movement and flexibility, it can also help to ease pain.

The decision to fuse or not to fuse can be a complex one. It will probably be based on the surgeon's assessment of two factors: the amount of instability that a discectomy will cause and how much disc space is necessary to restore. If the surgeon opts not to do a fusion, a different follow-up surgery may be recommended.

A laminectomy involves the removal of part or all of the bone covering the spinal canal. The purpose of this procedure can be to free nerve roots, remove a tumor, bone spur or to perform certain types of fusion procedures.

During the surgery, a one to two-inch incision is made in the low back. The spine surgeon then chips away the lamina of one or more vertebrae to gain access to the disc area. The surgeon will then remove any fragments that may have broken away from the disc, as well as the area of disc that is herniated and pressuring a nerve root. The entire disc is not removed. If it was, you would lose the shock-absorbing function of the disc between the vertebrae. Instead, the surgeon typically removes the part of the disc that has ruptured outward, along with another 10 or 20 percent of the disc, in order to prevent future problems from arising.

A laminectomy is often used to treat recurrent disc herniations, or where scar tissue is involved. Laminectomy may also be used in cases of spinal stenosis in which the entire canal is narrowed like a ring on a swollen finger. 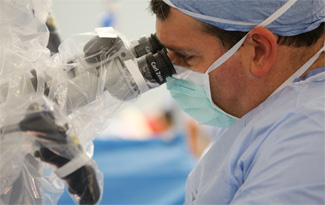 Each year, nearly 200,000 Americans undergo fusion surgery with hopes to relieve pain from complicated degenerative disc disease and spondylolisthesis. The surgical outcomes are often unpredictable, and success is not guaranteed. Innovative developments in minimally invasive techniques have pioneered better ways for the surgeon to access the spine, moreover making the recovery process more seamless. In time, such techniques are expected to replace conventional surgical approaches.

Several weeks of recovery may be required for traditional “open” spine surgery as it may involve a three-inch long incision, in which muscles and tissues are separated for optimal access to the injury site. The surgery usually results in trauma to surrounding tissues and considerable blood loss; because of this the affected tissues and muscles need adequate healing time. 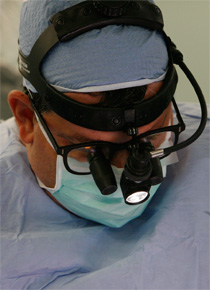 With the objective of least interruption to the patient’s regular, active lifestyle, minimally invasive surgical techniques provide the opportunity to successfully treat back problems. These surgical methods have achieved results similar to those of conventional “open surgery.” A smaller incision is made, sometimes only a half-inch in length. The surgeon inserts special surgical instruments through these tiny incisions and probes in order to access the damaged disc in the spine. Entry and repair to the damaged disc or vertebrae is achieved without harming nearby muscles and tissues when using minimally invasive techniques. Additional advantages of minimally invasive techniques include reduced surgery duration and recovery time, as well as less pain, blood loss and visible scars.

With the introduction of minimal access spinal technologies (MAST), spine surgeons have the opportunity to create the least amount of invasion possible, while at the same time accomplish identical results as open spine surgery. Due to the acute accuracy provided by these tools, surgeons create a smaller surgical work area. Oftentimes, bone is acquired from the hip of a patient during traditional fusion procedures. Unfortunately, this process may cause pain and discomfort rivaling the actual surgery. Alternatively, it has been introduced to utilize BMP, also known as “bone morphogenetic protein”, a bone-growth substance and eliminate the need for harvesting bone from a person’s hip.

Trace protein extracts are found in bones and are required for the bone to heal or regenerate. A sufficient amount of the protein must be available in order to begin bone formation. Scientists have developed a usable form of BMP that is now being used in place of bone harvested from a patient’s hip. This bone graft is made from pure bone protein (minerals and collagen) and absorbable collagen sponge that promotes new bone formation. Studies show that the positive results achieved from surgery using BMP equal that of an autograft procedure (in which bone is taken from the hip).

Spine surgery is commonly a last resort alternative, after all nonsurgical methods have been exhausted, or when complications such as severely herniated discs or damaged vertebrae simply will not respond to nonsurgical treatments. With this knowledge, the ultimate goal of spine treatment is to reach the root of the problem, while causing the least amount of disruption to the patient’s lifestyle.

In cases when surgery is the right course of action, it is vital for you to play an active role in selecting the best spine surgeon for you. You should seek out a surgeon that specializes in spine problems rather than one that is non-specialized and conversely treats a wide variety of injuries, such as head, knee and shoulder. As with anything else, practice makes perfect. The more a person does something, the more second nature it becomes. 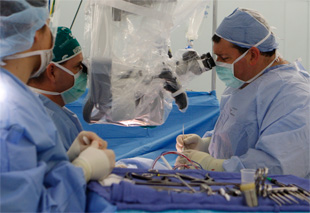 Rhizotomy is a procedure in which the physician may use heat or cold to intentionally damage the ability of a problematic nerve to telegraph pain signals to the brain. While pain signals serve to warn us about danger or injury, sometimes a nerve can end up in a "stuck" position, sending a continuous pain signal to the brain.

"Neuroablation" is another word used to describe the surgical procedure to purposely inhibit the nerve's ability to transmit a pain signal. During the procedure, the spine surgeon can destroy the problematic nerve by cutting it or by using extreme heat or cold. This intentional "short circuit" can be temporary or permanent, depending upon the procedure.

Trying to mask this signal with drugs can have damaging long-term implications. Drugs can have dangerous side effects to internal organs. By using rhizotomy, the pain signal is turned off at the source. 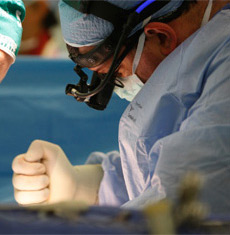 Through the placement of hooks, rods and screws, a spinal curve can be corrected and stabilized. A fusion often follows scoliosis surgery, in order to maintain the correction permanently.

Scoliosis is not the result of an injury and usually appears without cause. It can be inherited, and it usually affects more women than men. In the case of most spinal curves, the spine is not only bent but twisted like a bent corkscrew.

Some cases of scoliosis are not serious. Over time, if a curve worsens, surgery may be required to correct the curve. In extreme cases, if the curve is not corrected, the spinal deformity can place pressure on internal organs, which can shorten a person's life expectancy.

During scoliosis surgery, the surgeon may use special instruments that hook onto various vertebra segments. These surgical rods are the adjusted to "de-rotate" the twisted and bent corkscrew.

Decades ago, Harrington Rods were used to surgically straighten the spine. However, this technique did not untwist or correct the spine. Current state-of-the-art instrumentation achieves much better spine correction than older rods did.

Generally speaking, the younger the patient, the more flexible the spine and the better the result from scoliosis surgery. As the patient becomes older, say over 40 years old, the spine is less flexible, and there may be a greater risk involved in attempting to correct the curve. Because the spinal cord is involved, only spine surgeons who specialize in scoliosis should perform scoliosis surgery.

During this procedure, the patient is awake, and the surgeon delicately places tiny electrodes under the skin in the back. At that point, a tiny electrical current is transmitted through the wires to the desired location in the back. This sensation feels like a tiny tickle, as the electrical current interrupts the pain signal that may be sent to the brain from the damaged nerve. The patient helps instruct the surgeon as to which electrical setting and placement of wires produces the most pain relief. It is important to note that this technique is only used in the most extreme cases of back and leg pain.