Back on course after joint replacement surgery 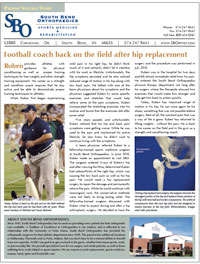 Richard began playing sports as a child and he has continued to play since. While attending Notre Dame he played both baseball and basketball. And Richard went on to play professional basketball with the Detroit Pistons. Thoughout the years, Richard has maintained an active professional and personal lifestyle. In fact, one of his favorite ways to unwind and relax from the stresses of life is on the golf course. But, after years of running down the basketball court, followed by years of twisting, squatting and walking on the golf course, Richard began experiencing stiffness and pain in his knees.

He made an appointment to see his family’s orthopaedic physician at South Bend Orthopaedics. After examining Richard and ordering diagnostics, the board-certified orthopaedic surgeon explained to him that he was suffering from osteoarthritis and degenerative joint disease in his knees, the condition was worse in Richard’s left knee.

Degenerative joint disease stems from wear and tear on the knee and typically affects those in middle age and older. Osteoarthritis causes the cartilage to erode away, when this happens the bone rubs on bone, which is painful.

The SBO surgeon suggested he exhaust conservative care options, like anti-inflammatories and knee strengthening exercises, before surgery. Richard agreed to do so, but as time went by, his mild and sporadic knee pain was worsening and becoming chronic. Simple activities like walking were becoming difficult. Golf was now impossible because of the pain.

Richard again visited his orthopaedic surgeon at SBO to seek some relief. The surgeon took an MRI of his painful left knee and discussed with him the total knee replacement surgery necessary to resurface the diseased joint. Richard knew he wanted to return to his normal activity level and decided to move forward with the surgery. When asked why he chose South Bend Orthopaedics, Richard reflects by saying, “The surgeon gave me confidence that the total knee replacement was not only the right option, but the best treatment option for my painful knee. He made certain I understood what to expect before and after surgery”.

Richard’s recovery from knee surgery was successful and he returned to his normal activity level within five months.

While his left knee felt great, he soon noticed increased stiffness and pain in his right knee. Over the years, he had discussed with his surgeon that surgery may be necessary for the right arthritic knee also. When Richard could no longer bear the pain and stiffness associated with the diseased joint, he decided to have the right knee replacement surgery. This took place about two years after the the left knee surgery and Richard was happy to have the same successful results. He returned to his full activity level - including golf - without pain and stiffness associated with osteoarthritis.

A few years later, when Richard began having pain into his left hip, he did not hesitate to visit the orthopaedic specialist at SBO. Richard was diagnosed with osteoarthritis and degenerative joint disease in his left hip.

He first tried non-surgical treatment options, which offered temporary but not lasting relief from his hip pain. Richard then decided to have the total hip replacement surgery necessary to repair his diseased joint. The surgery was successful.

He is no longer limited in activity and enjoys riding his bike for exercise once again. “I’m back on the golf course several days a week now, without the joint pain,” Richard states.

Click here to download a PDF of Richard's successful recovery from joint replacement surgery at South Bend Orthopaedics in Indiana.

You will need the Adobe Reader to view and print these documents.