Rowing on the St. Joe River after hip replacement surgery 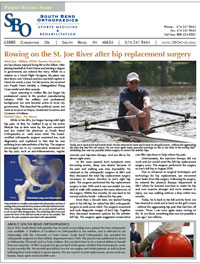 Joe has always enjoyed living life to the fullest. After playing baseball at Notre Dame and earning a degree in government, Joe entered the Navy. While on a mission as a Naval Flight Navigator, his plane was shot down over Vietnam and Joe was held captive in Hanoi for nearly a year. For his service, Joe received two Purple Heart Medals, a Distinguished Flying Cross medal and other awards.

Upon returning to civilian life, Joe began his professional career in the product manufacturing industry. With his military and professional background, Joe next became active in local city government. This launched his political career. Joe went on to serve as Mayor, Lieutenant Governor and Governor of Indiana.

While in his 40’s, Joe began having mild right hip pain. At first, he chalked it up to his active lifestyle but as time went by, the pain remained and Joe visited his physician at South Bend Orthopaedics to seek some relief. The boardcertified orthopaedic surgeon examined Joe, took diagnostics and explained to him that he was suffering from osteoarthritis of the hip. The surgeon encouraged Joe to try conservative treatment for his hip pain, such as anti-inflammatories, regular exercise and injection therapy. And Joe did so for about eight years.

As the years passed, Joe’s symptoms were becoming severe, sleep was elusive because of his pain and walking had become difficult. He returned to his orthopaedic surgeon at SBO and they discussed the total hip replacement surgery necessary to restore function to Joe’s right hip joint. The surgeon performed the hip replacement surgery in late 1996 and it was successful. Joe was able to walk with assistance the same afternoon of his surgery. Within five months, he was back to his normal activity levels - without the hip pain.

More than a decade later, Joe started having pain in his left hip, he visited his SBO orthopaedic surgeon to seek some relief. The surgeon examined and took diagnostic images of Joe’s hip. Together they discussed treatment options for his arthritic left hip. The surgeon again suggested conservative care like injections to help relieve his pain.

Unfortunately, the injection therapy did not work and Joe would need the left hip replacement surgery soon. The surgeon performed the surgery on Joe’s left hip in August 2010.

Due to advances in surgical techniques and technology for hip replacement, Joe recovered even faster from this surgery. Following his surgery, with guidance from his SBO surgeon, he followed an exercise regimen to make his hip and core muscles stronger and more resistant to injury. Joe was walking without a limp within two months.

Today, he is back to his full activity level. Joe has returned to work and is back on the golf course - without the aggravating hip pain that had him off course. “Now, I am back rowing on the St. Joe River, something that was not possible a year ago,” Joe reflects.

Click here to download a PDF of Joe's successful recovery from hip pain at South Bend Orthopaedics in Indiana.

You will need the Adobe Reader to view and print these documents.